Dunton Environmental successfully utilises Regener8-19 Heavy Metals treatment solution for the remediation and treatment of approximately 10,000m3 of heavy metal impacted topsoil at Tadpole Farm. The process reduced the total leachate values by 93% within 2 weeks of product application. The process diverted all the waste from hazardous landfill and enabled the safe reuse of the materials resulting in a direct cost benefit to the Client.

Regener8-19 is applied to soils that are polluted with various heavy metal contaminants. The product acts to alter the chemical environment within the solid matrix.

The project site, known as Tadpole Farm in Swindon was a green field site with typically little to no risk of any ground contamination. However a small part of the former use of the site was for a shotgun shooting range. Recent investigations carried out identified the presence of heavy metal contamination within a section of the site formerly used for the shooting range and the source of the contamination was found to be from the leaching of the lead shot. The contamination was generally confined within the top 300mm of the topsoil with some impact in the deeper subsoil’s up to 500mm deep.

Test data taken indicated that an area of approximately 45,000m2 had been impacted with lead contamination with the highest recorded solid concentration level of 8,800mg/kg and a leachate value of 2.72mg/kg.

Over time, weathering and corrosion had transformed the elemental lead into more soluble lead salts such as PbCo3 and hydrocerrusite Pb3(CO3)2OH. Lead corrosion products are not stable and can readily form water soluble ions (Pb2+). This can result in leaching and migration of lead at unsafe levels to surrounding ground water and surface water.

Lead poisoning can cause a number of adverse human health effects, but is particularly detrimental to the neurological development of children. Since the project area was designated for residential development and these soils posed a risk to human health and the controlled waters, it was deemed necessary to either remove the soils off site to landfill or treat the soils to enable reuse on site in a safe manner. 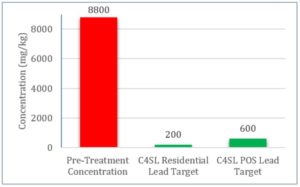 In 2012 the revised Contaminated Land Statutory Guidance introduced a new four category system for classifying land as contaminated under Part 2A of the Environment Protection Act 1990. Category 4 Screening Levels (C4SLs) have been published for substances that are commonly identified in contaminated land risk assessment including Lead, (Pb).

It was agreed that lead impacted material above these levels would be excavated and removed from the residential areas and treated to enable reuse in public open spaces below a capping layer of soil. The soil was treated to reduce the leachate concentrations to below the Inert Waste Acceptance Criteria (WAC) of 0.5mg/kg to reduce the risk to controlled waters. 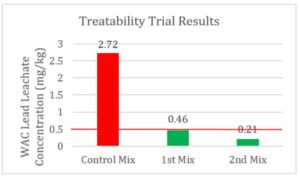 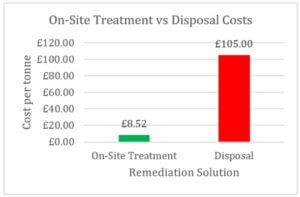 Treatability trials were performed by Dunton prior to the works to investigate the behaviour of lead contamination within the soil matrix. It was determined that there was a direct correlation between the leachate levels and the solid lead concentrations. It was also found that the addition of Regener8-19 solution would give a significant reduction in the leachate values of lead, and thereby meet the agreed remediation criteria set by the Environment Agency.

During the site works, Regener8-19 was applied in a powder medium to the surface of the impacted area and distributed homogenously through the soil via Dunton Environmental’s Stabilization Unit.

Following this application the soils were treated with Dunton’s reactive apatite mineral to induce effective long term stabilization. After treatment, the soils were tested and placed in a stockpile on site pending validation. On successful validation of all the soils, they were re-used on site in accordance with the agreed requirements.

The overall duration for treatment and validation was 5 weeks. 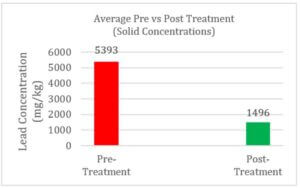 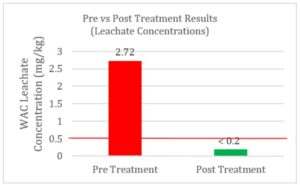 Following in-situ treatment, 50 test samples were obtained (at a frequency of 1:200m3). It was found that following the use of Dunton’s Regener8-19, that the leachate levels had reduced by an average of 93% from a peak level 2.72 to below 0.2mg/kg for Lead.

Dunton Environmental’s approach to this challenge demonstrated their understanding of recent regulatory guidelines and the benefits that the use of Regener8-19 has in land remediation and heavy metal treatment. The use of this technology helped save the Client on unnecessary landfill disposal costs and ensure they remain sustainable in their approach to minimising waste from construction.

“It’s refreshing to have such a positive, well-mannered and hardworking one-team approach from all the guys. All of the operatives are good to work with, the level of service has been great to date.

We are impressed with record keeping and planning future activities and forecasting potential issues of the works, this appears to be paying off as you are on target and equally working in the safe manner we must deliver.